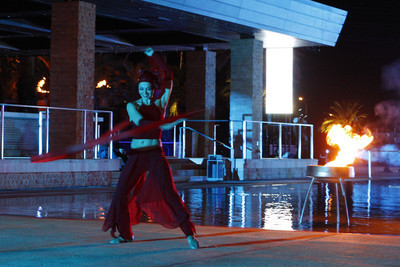 M Resort bartender Edgar Manago had a big smile Sunday night as he poured free drinks for some of the 4,000 guests attending the $1 billion hotel-casino’s grand opening party.

Manago, a gaming industry bartender for more than 15 years, had a job for the first time in many months."It feels good," said Manago, who was laid off by multiple casinos in 2008.

"Everybody is really happy and ready to get to work," he said, speaking for M Resort’s 1,800 employees

For an evening, at least, the opening of the 390-room M Resort helped people forget the sour Southern Nevada economy, where gaming revenues and visitation sank to record declines in 2008.

"It’s not only a good indication that maybe things are turning around, the opening is a great morale boost for the community," Rep. Dina Titus, D-Nev., said as she toured the casino. M Resort is located in Titus’ congressional district.

Alexis Shapiro operated her own wholesale design company before joining M Resort as ambassador host. For a small-business owner, the sour economy made for a challenging business environment.

A full-time job with M Resort means a steady paycheck. That’s one reason she and other employees feel they have a vested interest in the property’s success.

"Customer service is so important in these times," Shapiro said. "That’s something we’re going to stress."

If the VIP party was any indication, the M Resort will be a soaring success.

Invited guests helped open the property before paying customers made their way through the entrances shortly after 10 p.m.

A fireworks show and water and fire show viewed from the property’s spacious pool area signaled the opening after an 18-month construction period and more than four years of planning.

A lot of people want to check us out, which is great," M Resort CEO Anthony Marnell III said. "It makes me feel good that there are people that want to come see what we did."

Marnell, 35, who owns two casinos in Laughlin and one in Pahrump, learned the gaming business from his father, casino construction pioneer Tony Marnell, when his family owned the Rio in the late 1990s.

Seeing paying guests come through M Resort’s entrances will not culminate his dream but will start a new endeavor. Building the hotel-casino was the first challenge. Operating in the current business climate is the next challenge."

I’ve been waiting to see cars lined up (to get onto M Resort’s property) for a long time," Marnell said. "We’re a new property and we don’t have one customer. We have marketing plans for March, April and May to build our customer base from scratch."

Las Vegas resident A.J. Lee booked a room for opening night and was at a roulette table right at 10 p.m. He won his first wager, betting $5 on both 15 and black.
‍
"That’s what I like," Lee said. "I’m a winner on the first spin of the wheel."

A few tables over, Barbry McGann of California was playing blackjack. Her table cheered when she drew an ace-jack for what might have been the first blackjack paid out at M Resort.

Within minutes after the doors opened to the public, M Resort was packed with customers looking for their favorite games.

The VIPs for the most part, were impressed by M Resort, which has a 90,000-square-foot casino, nine restaurants, 60,000 square feet of meeting space and a 2.3-acre pool area with fire and water features and an outdoor entertainment stage. The western side of the hotel tower features five two-level loft suites with floor-to- ceiling glass.

Guests were able to sample food from the casino’s restaurants and toured the outdoor area before the public arrived.

"It turned out fantastic," Marnell said just before the VIP party began. "The architecture came off the way we wanted. It’s more open than I thought it would be. The response from people who will tell me the truth said we did as good a job as we could have done."

Sen. John Ensign, R-Nev., said the opening shows individuals in Southern Nevada are willing to do what needs to be done in light of the economic downturn.

"There are too many smart people in this town, like the Marnells who know to build something that is good for the community and the economy."

Henderson Mayor Jim Gibson said M Resort might serve as the southwest gateway into the city, with its location at the intersection of Las Vegas Boulevard South and St. Rose Parkway.

"This was a bold move in this economy and it’s important because everything is all cloudy and gray," Gibson said after a brief ribbon cutting ceremony with Marnell.