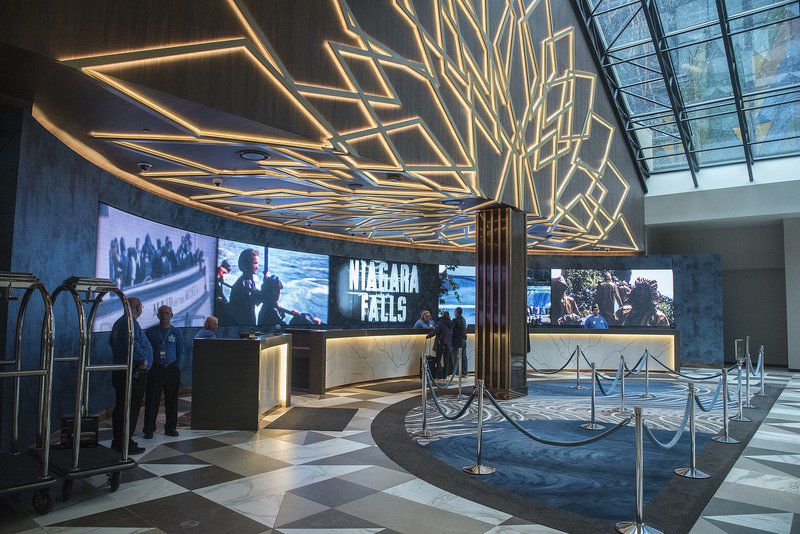 NIAGARA FALLS
You can see the excitement in Patrick Bassney's face.

As he strides through the collection of construction equipment and tradesmen at the entrance of the Seneca Niagara Resort & Casino hotel, he's more than eager to talk about the newest renovations and re-imaging of the Fourth Street gaming property.

"The idea was to give us a grand new entrance and a more contemporary feel," Bassney says. "We started on the inside (at what was the original casino hotel reception desk) and then moved out."

And in just over a week, casino customers and Falls residents will start to see some of what has Bassney, the casino and resort general manager, so excited.

Gone will be the unmarked, narrow, two-lane, in-and-out entrance to the casino's hotel from John Daly Boulevard. The two fenced-in asphalt parking lots have also been removed.

Instead, visitors will arrive to a new, grand, tree-lined drive, complete with new signage, that will lead them to an extended portico that will form the new main entrance into the casino and resort.

As folks come up the grand driveway, they'll be greeted by a round-about that features what casino officials have called an "iconic sculpture." The sculpture features the animal symbols of the eight clans of the Seneca Indian Nation, surrounding a single feather, which is an emblem of the nation.

The project was designed by Las Vegas-based Marnell Corrao Associates the country’s oldest and largest hotel and casino design firm. It begin in April 2018 with relocation and re-design of the hotel front desk.

The updated front desk sits in front of a 300-square foot concave 8K LED screen that continuously displays vintage videos of the falls, as well as historical pictures from the Seneca Nation.

"It's moving all the time," Bassney said of the front desk video board. "It's all designed to create a sense of energy as you enter the hotel."

The new entrance construction began in June and is expected to be completed this summer. Seneca Gaming Corp. officials have previously said the multi-phase renovation project has a $40 million price tag.

It's the first major renovation undertaken at the 16-year-old casino and attached 12-year-old hotel.

As visitors get out of their cars under the new portico, they'll also notice that the solid brick walls of the old hotel entrance have been replaced by 30-foot high glass walls that allow a flood of natural light into the property.

Most casinos have few if any windows and little natural light.

"We're not afraid of the light anymore," Bassney said with a smile. "You still won't see a clock in here, but we want to let the light in."

The lobby bar has been repositioned and has a new color scheme and more modern decor. Bassney said a soft opening of the bar was well received.

"There's been a lot of intrigue. We had curtains up (to hide the construction work on the new bar), and our regular customers had been peeking around them to try to get a look," he said. "Then when we took (the curtains) down, they were very happy with how (the new bar) looked."

A new casino entrance off the renovated hotel lobby has also opened up room for another 500 slot machines.

"We'll also be renovating and updating some of out (hotel) rooms," Bassney said. "The goal is to make this a more exciting place to come and play. This is one more step in the evolution of the facility."


by, By Rick Pfeiffer
rick.pfeiffer@niagara-gazette.com